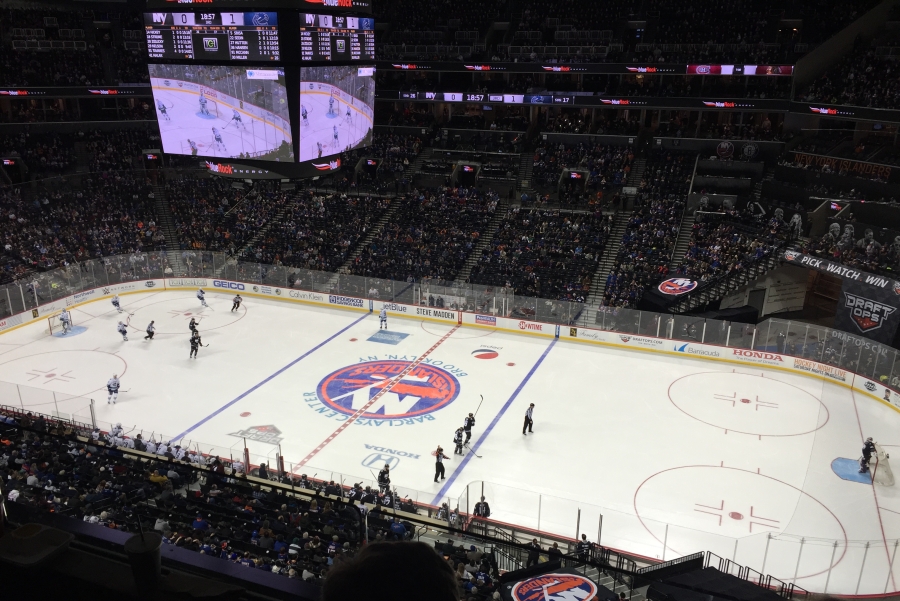 After flying home on Sunday morning from seeing the Sabres in Buffalo, we got right into our car and drove north again to see the Islanders play the Vancouver Canucks at the Barclays Center in Brooklyn. This was the Islanders inaugural season in Brooklyn for, what turned out to be a very short stay before they moved back to Long Island.

This was also the only game where someone attended the game with us. Colin’s godfather and, my best friend since we were 6, lived in Hoboken at the time. So we stopped by his place, dropped off the car to make our way into Manhattan, then to Brooklyn for a 5:00 game. Admittedly, the travel this weekend was rough but wasn’t nearly as bad as some of the other trips we would do in subsequent years.

Before we went into the city, we grabbed an amazing lunch at Grimaldi’s pizzeria. This place it outstanding and remains one of my favorites. They even have a location out in Las Vegas which I frequent every year at re:Invent and other conferences.

After lunch, we traveled in by subway and got to Brooklyn with ease. It was a bit surreal for me as it was my first time at the World Trade Center site in 9/11. My wife is from New York and the idea of visiting the site was always a bit raw for us. The skyline still doesn’t resemble the one I visited for so many years.

Arriving in Brooklyn, we got out at the Barclays Center which is… interesting. The exterior is actually quite cool to look at and the arena sits below ground so it’s interesting to observe because that runs counter to your standard arena design. After explaining our tour the Islanders, they were quite indifferent and I think they offered Colin a bobblehead. But on the whole they weren’t overly welcoming.

The inside of the arena is an odd setup for any sporting event as it has really non-standard sight-lines. I’m not really sure how to describe it but if you’ve watched an Islanders or Nets game on TV, you’ll see random SUV’s being marketed in the corners. The old Nassau Coliseum wasn’t the best place to see a game but there was also something about the character of older arenas that is attractive. This felt sterile.

We have few rules for these trips and try to just enjoy the memories that we’re making. Of the three rules we do have, #2 is to Always cheer for the home team (unless it’s New York or Pittsburgh). Being true to our word, we spent the afternoon cheering for Vancouver who wound up winning the game 2-1 in Overtime. I got a lot of nasty looks and a few comments from the Islanders fans but having a 9 year old with me probably kept it from getting carried away.

We dropped Steve off at his house, said our goodbyes and made the long drive home. It was another long but incredibly fun weekend. Colin, who is now turning 13, it an excellent traveler and just goes with the flow. I think that these trips and learning to adjust on the fly and deal with inconveniences along the way has helped. Hopefully, that’s a life lesson that he’ll carry forward with him as he gets older.

Our next trip was to New York to see the NY Islanders. It was a quick but fun trip. After we flew home from seeing the Sabres w e met up with my Godfather for lunch in New York. When we got to the arena we found our seats and watched the game and it was awesome. They faced off against the Vancouver Canucks and lost 2-1.

The setup of the arena is actually quite interesting they have a wavy look on the outside that’s covered in silver and on the inside they have a huge display area for a certain kinds of cars from Honda. Even though this was a quick trip I had a great time in NY.